Hubdoc reduces data entry by accurately capturing information from bills and receipts and publishing it to Xero; making it easy to match transactions to the Xero bank feed. Hubdoc is included in Xero Starter, Standard and Premium plans (Xero Early, Growing and Established in the US).

Explore all features of Hubdoc

Easily get bills and receipts into Xero

With Hubdoc, you can capture bills and receipts using any device including your mobile, email or scanner. Once uploaded, the key information is automatically extracted and ready to publish to Xero with the original bill or receipt attached.

Bills and receipts show up in Xero as accurately categorised transactions that are ready to match with your bank feed for an up-to-date view of your financials.

All your bills and receipts are securely stored in the cloud; searchable and easy to access from anywhere in the world.

Hubdoc is officially part of the Xero partner program. That means you’ll earn 5 partner points for connecting and actively using Hubdoc with your Xero practice organisation. You’ll also earn 1 point when you connect a client’s Hubdoc organisation with their Xero organisation and actively create transactions between Hubdoc and Xero.

Explore how to setup Hubdoc 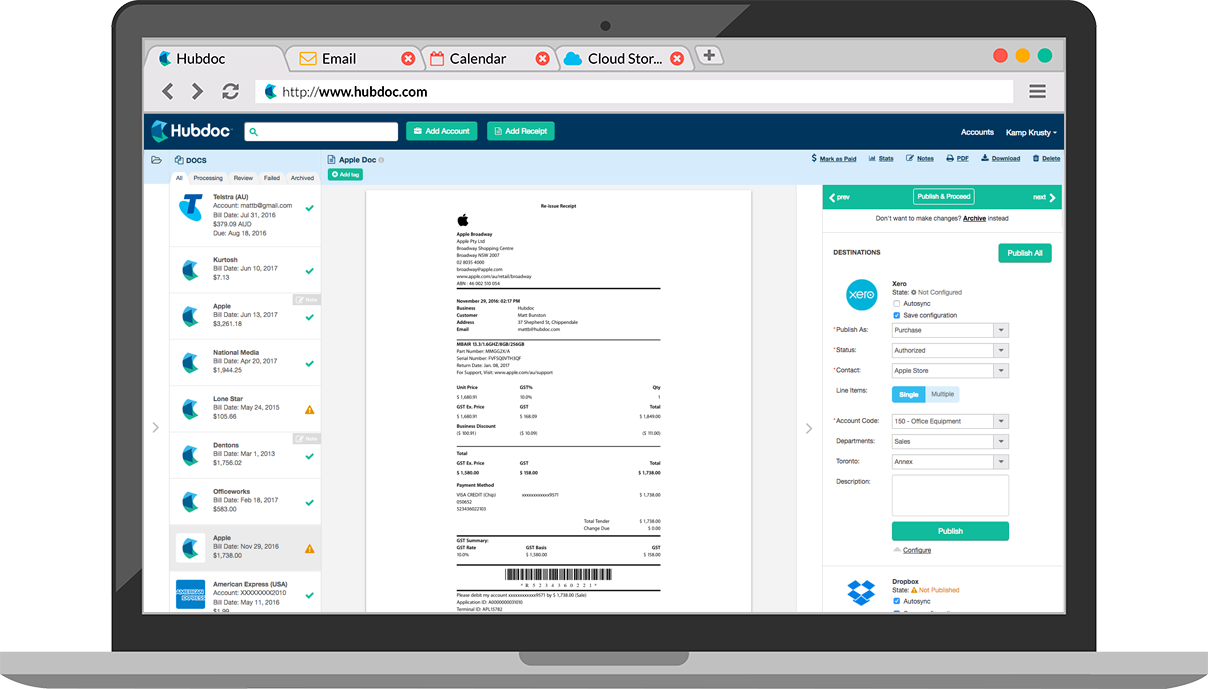 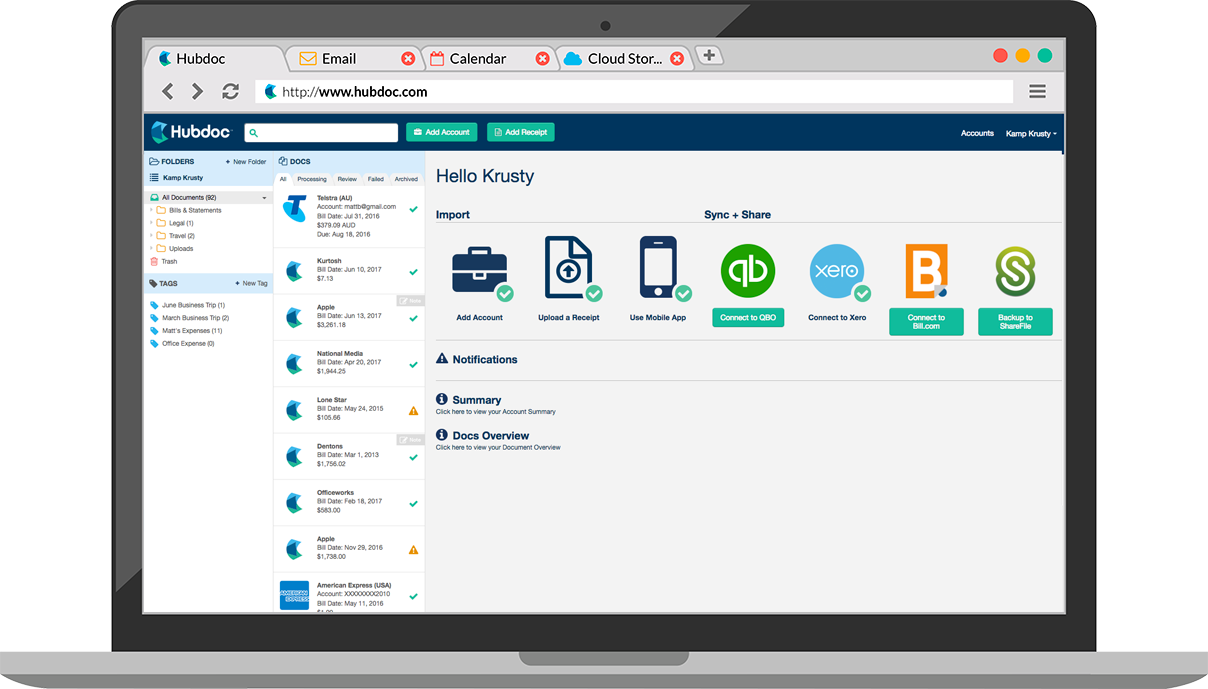 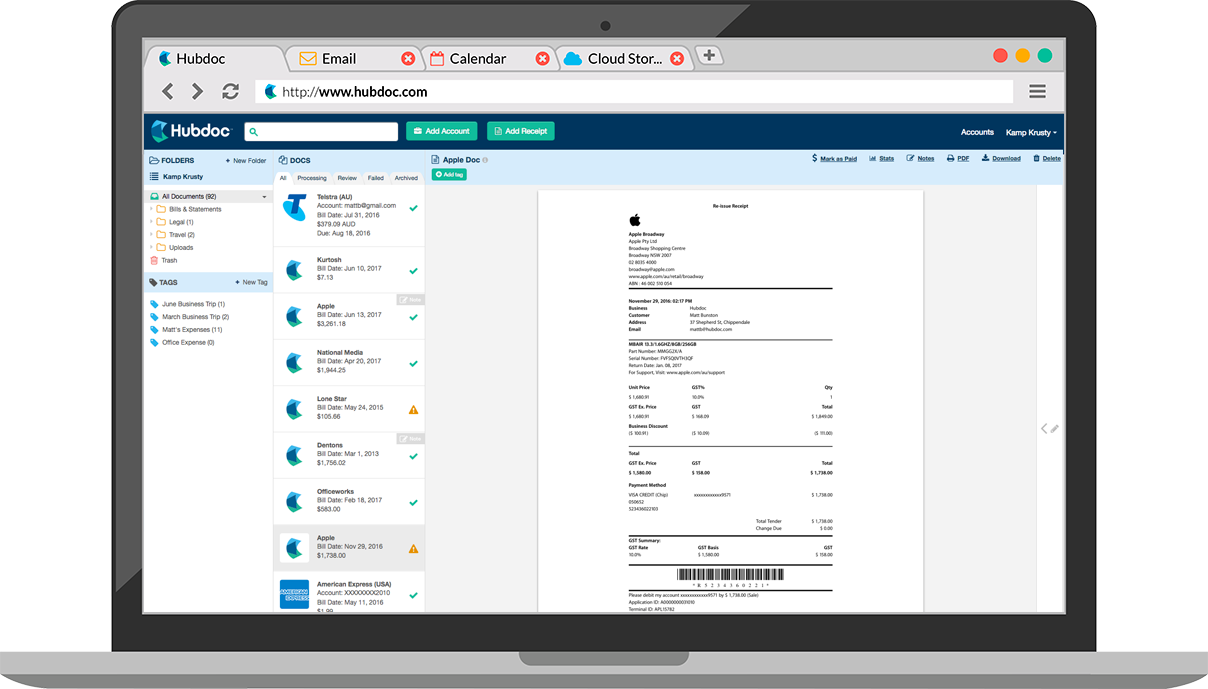 I tried to use Hubdoc to save time, however, I ended up losing more time due to how slow and unreliable hubdoc is. I hope things change in the future but for now, I wouldn't recommend Hubdoc to anyone.
BC
Benjamin Cebon
Posted

I really really want to like Hubdoc... but it just keeps disappointing me. Despite looking and feeling really clunky, It does work reasonably well most of the time, in the reasonably narrow range of things it can do. However, the point of a system like Hubdoc is that you use it as a system, for everything. Unfortunately, Hubdoc cannot handle everything, it can't even handle account credits / credit notes, so I end up using Hubdoc for some things, manual entry and filing for other things, and therefore end up with documents split between systems - in other words a mess! It's just not a well thought out product, and as I've discovered through a long list of support cases, it's no longer being actively developed and improved. I think Xero just bought them as a bolt-on, but it needs to be developed further and improved. I really wanted Hubdoc to work for me, especially as it's included in the cost of Xero, but at this point I'd rather pay more money for something intuitive that actually works consistently.
JJ
Jiten Joshi
Posted

Setup walkthroughIntegration walkthrough
Although Xero reviews each app in the Xero App Store, we can’t give any guarantees. It’s up to you to assess the performance, quality and suitability of any app before going ahead.
We use cookies to give you a better experience. Check out our cookie notice for more information.